Happy Monday everyone. Before we begin Sarah is raising money for Family House, here is a link to the Jamberry party page .  30% of all sales will be donated to Family House. So you can get pretty nails whilst helping a great cause. 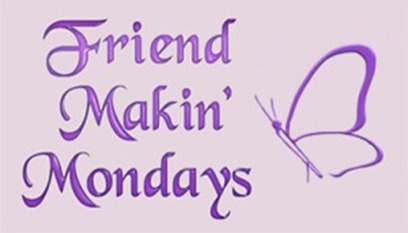 If you’ve taken part in Friend Makin Mondays before then you are familiar with the rules. If you’re new, please take a moment to answer this week’s question on your own blog then add your link in the comments section here so we can all see your FMM questions and answers. Please invite your blog readers to add their links here too so everyone has to opportunity to be seen. The idea is to connect with other awesome bloggers so take a moment to read and comment on a couple of other posts. Once again yours truly supplied the questions… so if you want to participate or submit questions…. check out Sarah’s page

1. Would you rather go without television or fast food for the rest of your life? I can give up fast food …. I don’t think that I have ever eaten it for the taste, I think more than anything I eat for the convenience of it. Plus there are tons of copy cat recopies online, if I was really jonesing for something in particular. But television… you have got to be crazy… we recently changed cable providers and the time in between was hell…

2. Would you rather have permanent diarrhea or permanent constipation? Neither sounds like a party… and unfortunately I’ve has both. This story is TMI so you might want to pass this question. Right after my liver transplant I was on some heavy duty pain medication and I hadn’t had a bowl movement…at this point it was nearly two weeks, and I had stopped eating because I honestly felt like there was no more room in my body to hold anything. I called my transplant coordinator (who is a nurse who is your “call to person”) and told her my issue. And she said something to me that I will never forget (I should also say that my mom told me to do the same thing) she told me to stick my finger up my butt and proceed to “scoop out the poop” I told her under no uncertain terms would my finger be scooping out my crap… so she proceeded to prescribe me a hospital grade laxative and within the next 12 hours I felt an urge…. it was not pretty. first of all I’ve super sore in my stomach area from the surgery…and since my abdomen muscles were cut, they are pretty useless and I can “push” it was painful, there was a lot of sweating, a lot of cursing, and I think I might have left gouges in the sink” I walked away from that experience totally know what it feels like to give birth… that is something that I NEVER want to experience again…so my long winded answer is I’d rather have diarrhea (which would probably kill be due to me going into shock for the dehydration… what the hell was I thinking with this question?

3. Would you rather be handsome/beautiful and dumb or be ugly and really smart? Ugly and smart…. or in my case passable attractive and smart as a whip

4. Would you rather be always be cold or always be hot? I walk around feeling cold all the time so its not big deal to be could you imagine walking around being hot and sweaty all the time.

6. Would you rather eliminate hunger and disease or be able to bring lasting world peace? Hunger and Disease. Who knows maybe if the worlds most vulnerable people would feel more empowered if they had their basic needs met…. But as long as there’s me an earth there has been war… so I’m not sure that world peace is even achievable.

7. Would you rather be stranded on a deserted island alone or with someone you don’t like? I need human interaction, even if it’s from someone that I can’t stand. I figure that if we are there long enough we are gonna have to communicate…. plus that whole “live together, die alone”… we gonna have to depend and trust each other to survive… besides once we get recused… I’m sure we won’t want to see each other anyway

8. Would you rather see the future or change the past? Neither, I think things are meant to happen, and if I went back and changed the past, I wouldn’t be the person that I am, the lesson I learned would be for nothing.  There are times when I think , “it would have been nice to get this diagnosed earlier, maybe I wouldn’t have ad to go through this or that”… but I feel like there is a bigger meaning behind my struggles.

9. Would you rather be three inches taller or three inches shorter? Being nearly six feet tall… TOTALLY… I would probably look thinner too… and I’m all for that!

10. Would you rather wrestle a lion or fight a shark? Considering both option may leave me seriously mangled and deformed I’m gonna simply say I don’t care…

As the Thai people would say….จนกว่าจะถึงเวลาถัดไป

Writing Prompt: You’re sitting at a café when a stranger approaches you. This person asks what your name is, and, for some reason, you reply. The stranger nods, “I’ve been looking for you.” What happens next?

So let’s start with a few things first this makes me want some coffee… oooh and maybe a muffin.

So let me be honest  I walk around with resting bitch face there is absolutely nothing that I can do about it. I have family members all the time telling me that I’m mean…(if they haven’t gotten over it by now… they will), and I am a super suspicious person so before anything else I will be giving props to someone who’s gonna  walk up to me with all those things that I am outward giving the world…

Then the person walks up to me and says, “Hello, are you Tyra? I’ve been looking for you” then instantly I’m thinking, “fuck, I’m about to get served” or “here comes the lamest pick-up line I’ve gotten this week, this should be fun” or “this person is about to tell me how my soul in jeopardy and I need to be saved”.

But let’s just say, this person is a lawyer and they say continue on to say, “I’m a lawyer from your great-great uncle Mortimer, he recently passed away and left his entire fortune to you” I’m pretty sure the next thing that happens is me passing out on the café floor.