Hey Snarkers ( Snarkarimos, Snark-a-doodle-dos….  which ever you prefer; I actually like the last… but whatever),

I hope you all still remember me, because I certainly remember you all and have missed you all and your comments during my long and unplanned hiatus, so let’s get down to it and cut the shit, where have I been? I would suggest you find a comfy place to sit, maybe grab a snack, perhaps a glass of wine if that’s your thing, and let me explain….

In May I was dealing with lack of motivation when it came to the blog, that’s a totally like I just had a lack of motivation all around, I wasn’t inspired to maintain my blog, I was blocked and really just had no energy to deal with it, or anyone else for that matter. What I didn’t know at the time was that I was getting sick, I had totally missed the signs and it took a toll on me, but I knew that once I got better, my mind would clear and I would start back with the blog… Well that was until

June rolled around, honestly much of June is still a blur to me, but during the first half I celebrated my birthday where as I recall I stayed at home and napped most of the day, mostly due to the full blown depression that I was in. I wasn’t speaking to anyone , I didn’t do anything except the required family functions and my weekly Friday walks with my cousin Candace it was literally the only time I went out, and I guess it made me feel a bit normal.. and strangely as quickly as it came on… it went away. I often thought to myself, “maybe its time to get back to write…anything…” But every single time I thought about turning on my computer I was filled with a  sense of dread…needless to say I haven’t turned on my computer for weeks, so I immediately thought the worst, Word press deleted my blog, or maybe I had gotten hate mail, or perhaps a a hacker got a hold of my password and porn has been posted since my absence. I couldn’t deal with it, so I just avoided it.

After being shamed… I mean seriously shamed for not being on “the snap” (as said as Candace) I mean seriously, I have Twitter and I rarely post on there…. did I seriously need to get on more social media… due to peer pressure…. the answer people, is YES… absolutely, and not only that I became seriously obsessed with Snapchat , or rest assured I have calmed down… On the upside after months of being on the waiting list, I was finally about to start therapy (I had been on the list since Fall of last year) I like my therapist, although I was ugly sobbing (and snotting) at my first session

July rolls around, still in therapy, starting to feel better, but therapy is work, and it seems like after every session I have extreme panic attacks, so after talking it out I decided to get on medication (I walked into my first session absolutely knowing that I didn’t want to on any kind of medicine…. I felt like it was the “easy way” out. But when you it gets to the point because you have to pull over on the freeway because you’re on the verge of passing out from your panic attack you realize that need a little more help. This is honestly one of the hardest thing I’ve ever done, I’m thinking about things and people that I purposely buried because I didn’t want to deal with them, What I though were quirky Tyra traits were actually Social and Generalized Anxiety Disorder…. around my third session I told my therapist that I wasn’t sure if I was gonna like the new person I was gonna because. Because I don’t know how not to be easy going, it’s difficult for me to just be calm and let things roll off of me…. I need to know the when, why, what, where’s or every situation…but despite the fear, I am willing to put in the work, it’s time.

And while you’re dealing with your own personal shit , real life happens… and boy did it! My aunt fell and broke up hip while trying to get out of the bed, while she was hospitalized they found lesions on her bones (with my limited medical knowledge I assumed she had Multiple Myeloma like me) turns out the origin of her cancer was not her bones, it was her throat and had spread to her bones and kidneys, naturally this devastated the family and we immediately went into action on the best way to care for her. She’s doing extremely well despite her diagnosis of soft tissue carcinoma. And she very realistic about her options, she has since gone through radiation, and has declined to do chemotherapy, she fells the chemo will harm her more than the cancer, at 78 she wants to live her life. I recently told her that I wanted her on this Earth as long as God intended her to be, but at the same time I don’t want her to be in pain. What’s the point of living when your quality of life is poor? While dealing with this I was actually dealing with the prospect of being a guardian to a 5 year old. His home life was less that ideal and the family wanted to step in before DCHS did. So I began working really hard getting myself and my environment together.  After having several lengthy conversations with the mother and the grandmother it seems settled that M will come and live with me. I start to wonder if I’m doing the right thing, I fear that raising this child will due more damage than good, I don’t know the first thing about being a parent, what if I screw this kid up and he hates me forever? In the end I realize that this is about him, and providing him a safe, stable, loving environment where he can thrive, I can do that, and everything else will just have to be taken one step at a time..

August is finally here. I realize that the summer is nearly over and I’ve done nothing….Things are really progressing with the guardianship situation, my goal was the get him and his siblings back to Chicago before school starts at the end of the month. I even got to the point where I was going to humble myself and ask my estranged father to bring them to Chicago (he comes every August, and he has to pass through where the kids were 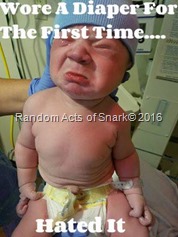 living, I didn’t feel like it would be a huge burden and I knew despite our relationship that he would do this for me. He would see it as a way of “getting in good” with me. Honestly thing are going pretty well, things seem to really falling in place, and just when I thought things couldn’t get better. Weighing in at nearly 10 pounds and 21 inches long showing his immediate displeasure with the word and making his Aunt Tyra extremely happy; Tyson Daniel made his entrance into the world, and because his very first baby picture was epic. I had to make him a meme. From the moment he was born I felt like he was meant to be in this family, everyone loves him. And he’s just perfect (naturally I’m biased) but he’s just a little doll)

Needless to say that joy was short lived, cause shit always happens. Eventually M did come back to Chicago, not with my father, but my plane due to his grandmother/my aunt. Long story short. M is not living with her, after she said numerous times that she could no longer care for them, after she sent them back to live their mother because, “this isn’t her job” after saying repeatedly that she wanted her life back. Not only does she have M, but his 5 siblings as well. M  was told by him mother that he was coming to live with me, we were all expecting it. But in the end I realized that a lot of people have their hands in the pot, a lot of people were doing under handed things, and in the end a lot of people got burned. I’m hurt and saddened by the situation, II;’m pissed off my the complete and total underhandedness of certain family members. Now I’m asked to take side and do underhandedness to get him back. I wont do it. I can’t as I told M’s mother when she wanted to get me her newborn when I was in grad school, “The only way I would ever take your child is for you to do it legally and sign the papers” in the end she failed to do it. And there is nothing for me to do but wipe my hands clean of the situation and move on with me life.

How the hell did September come so fast,  better question how is it almost over… SHIT!! It’s time for my step-dads knee replacement surgery. What was supposed to be a routine surgery with a 3 day stay turned into,  severe memory loss, him requiring a sitter in his hospital room, near kidney failure, a stay in ICU, then a stay in a rehabilitation unit.. Back and forth to the hospital was my schedule then it became. Tyra’s appointment, going to my aunts house, Going to my parents house and taking him to therapy and doctors appointments, skipping dinner and in bed my 7pm…. several times a week. I was exhausted, there was no way I was gonna start writing. My “me” time consisted of sleeping. Then one day I came up with this amazing idea to run away for the weekend to Clarksville, IN…what’s in Clarksville you might ask? TYSON!!! Seriously he changes every week and although the scowl is gone it been replaced with the most completive look ever… So now I have to go at least once a month to get my dose of baby.

One of the things that I talk about was the blog, and how I missed it. She begin talking about short term and long term goals, so getting back to the blog is a short term goals, and that gave me the extra push I needed to come back, but I honestly felt that I should explain why I was gone for 5 months. Will you accept me? Will you still read what I write about? Only time will tell, but thank you for being so patient with me.

A little bruised, but still here

With all my love,