As always my Weight Watchers Points into the fold.

I knew that today was going to be a busy day so I got all my favorites together and made a scramble” filled with protein from the egg whites and the lean ham. Every thing was measured before it was cooked and I was surprised by how much there was. The point was to fill up on breakfast and so that I wouldn’t over indulge since I knew that I was going out for lunch. 3 Smart Points and all that food, Seriously I think I did pretty good..

See the thing is I have a problem, a serious problem and it’s called macaroni and cheese, and I have said this many times, to many people but I don’t think there is a such thing as bad macaroni… it doesn’t exist, and so I eat it despite the fact that I know it’s going to be a crap ton of points (which is why I don’t eat it that often, but when I do I enjoy it…. And since I knew a lot of my points were going to be devoted to the Mac and Cheese I pilled on the veggies, and had a 0 point salad, and since I didn’t want to add a lot of points with the dressing I added about 1/4 cup of cottage cheese. Then I saw they had collard greens too…. those weren’t so great but I ate them anyway. Plus there was a diet coke thrown in there for shits and giggles.. Total Damage: 11 Smart Points.

I was supposed to be done with food for the day… but someone went out and go chicken, then I decided that I wanted a sundae….. this didn’t end well, but in all honesty I was hungry…. and I guess if I needed to I go delve into those “Anytime Points” And as you can tell these are stock photos…. well that’s because I totally forgot to take pictures, I was busy feeding my face. Damage: 24 Smart Points (and totally not worth it)

So totally Points consumed today: 38. Which means I deducted 4 points from my Anytime Points “bank”

I think the only thing that saved me today was that I was fairly active, I did a lot of walking over 10,000 steps, and I spent a lot of time that morning cleaning my house, laundry, mopping,sweeping… hell I did it all…. but my general coloric intake these days are around 13,000 calories, so overall I didn’t do too bad, and this is not a typical day for me food wise, so indulging once in a while is okay. 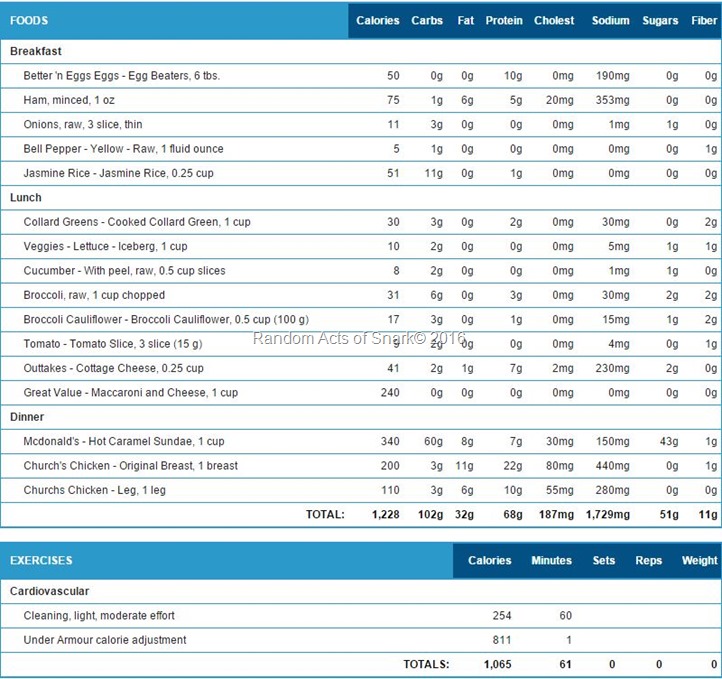 I had a lot of salty food today, and for some reason I drink the majority of my water in the evenings…

And that my friends is What I Ate this Wednesday Sunday; be sure to follow me MyFitnessPal or of you are doing Weight Watchers  or FitBit friend me there as well I’m TRJENKINS77