OPRAH:  A few weeks ago, anyone who follows weight watchers was pretty tired of hearing about “The Biggest Change in Weight Watchers History”…..  only a few weeks before that we heard how Oprah had brought stock in Weight Watchers… it all made sense…. that’s why Gail joined! Listen I’m the first to tell you I’m not a fan of Oprah, I don’t drink her kool-aid and honestly I don’t think she can tell me how I should be living my best life. (Yes, she can afford to live her best life, she has millions can afford a 200 cashmere sweater while she lounges on her farm in Indiana or her mansion in California, while average Tyra is robbing Peter to pay Paul just to insure that she doesn’t go in the red with her bank account….I might be slightly bitter)

GETTING TALKED OFF THE LEDGE: The day that the “Beyond the Scale” program starts was really the day that I decided this is it… I am done. My weight was creeping up every single week. I walked into that meeting weighting more than I did when I walked into Weight Watchers a week ago…. I was over the whole process and was seriously over wasting my money on a program that was not longer working for me. That day Noreen was there, Noreen (whom I mentioned before on this blog) has really been a lifeline to me even when I didn’t realize that I needed them.. I walked into Weight Watchers the week before I handed in my letter from doctor the receptionist who I will call her Vera said, “You sure you want to do this, it’s like cheating” looked at my letter, put a “note” in my file. So I’m standing there asking her “what’s next” and response was, “nothing different has happened now we know that your doctor wants you to maintain your current weight” and that was it;  now let me say that I have been very honest about my struggles and she knew I was on prednisone and she was well aware of why I had the letter…. so my feelings were hurt that she said that and honestly she wasn’t really acting in the “spirit of Weight Watchers” and it it took all of my energy not to curse her ass out. …. so fast forward back to the week that Beyond The Scale started after my experience the week before I honestly gave zero fucks..Noreen pulled me back from the ledge. We talked for 20 minutes about how frustrated I was and how after last week I decided that I was done. She wanted to see the letter, which I still had in my purse, she read it, looked at me and said, “this is exactly what we need, now let’s take a look at the note”  Vera in fact put a note in the computer but she didn’t actually put me in maintenance like she was supposed to. So Noreen, my WW Leader Cheryl and I came up with a maintance plan… I decided I can give myself 6 more weeks and if I still felt the same way I would quit. What I learned is that I need to have 1 point person…. Vera ain’t it, I don’t know what her problem is, she’s been a leader for a long time, but this is the second time that she’s said something made me give her a second look, the first time she said something that I felt was really odd was in the beginning of my WW journey, I told mentioned I would add 7 extra point to my daily points and she told me that the weekly 49 were not to be touched at all, they were there for emergencies…. Emergencies? Like what. I half a pint of ice cream fell in my mouth emergency? I went to to another leader for clarification…. I needed to know.  And of course, she told me that was absolutely not true I could use them as I saw fit. I don’t mean to make Vera sound like a bad person, but it’s clear she’s not MY person. That was also the day that I learned about the new program.

SMART POINTS: I don’t like change, I have mentioned that a lot on this blog, it’s hard for me to adapt to  new stuff, I was at the point in my Weight Watcher journey were I had nothing to lose… maybe this change was what I needed. It’s funny how the changes were things that either I desperately needed to change or things that I had complained about in my meetings. Now Sugar and Fat are heavily factored into points. Fitness for fitness sake . I will freely admit that those Fit Points were my safety net. I would use those after I had plowed through my weekly 49. Focusing more on your and the journey instead of the number…..Now while all of this was going on I was doing my best walking (which I loved) and doing my best to counteract the Prednisone, but then I busted my knee, the official diagnosis was fractured patella… I had to have blood drained from behind my knee and I was wearing a stabilizer was on crutches, it was a mess… which meant for weeks I was unable to do anything, so the weight crept up and my mood went down. My knee is a lot better now, but there is still a huge knot on my knee and I can’t be on my knee for any length of time (it feels like I’m kneeling on a rock 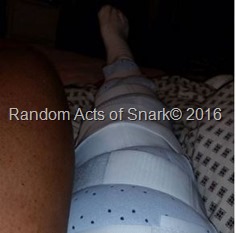 Looking back now, I think I went through the stages of grief….. I have now moved on to acceptance, the program is not easy, it’s a bitter pill for me to swallow. It’s hard sometimes to accept the fact that the caramel macchiato that I had this morning was 18 points….. 18 Smart Points…. What in the actually fuck is that? I mean seriously that like two meals…. but you know what I drunk it, I enjoyed it, and I realize that it wasn’t worth it, so I’m going back to my black coffee with equal and sugar free creamer which is only 1 Smart Point. So I guess that’s the beauty of the program.. make better, smarter choices…

SURVIVING IT ALL: There was a lot of fear going on maintance, every week I was gaining weight. I wasn’t sure if even doing that was a good idea. there comes a point where you just have to walk the path and let it take you were ever it goes (and for a control freak like me.. that’s hard…) As this entry goes live on Sunday I will be at my regular Weight Watchers meeting and would have officially completed my 6 weeks maintance and will me a Life Time Member (which is a whole can of beans) This is certainly not how I wanted to get to Life Time, but my journey has not been the typical one, and it will never be, Life Time will bring a while new level of challenges that I have to take one week at a time. I am roughly 6 pound lighter than my official maintance weight, my weight goes up an down every week…..depending on what I’ve eaten and done, I’m expecting a gain this week, between being premenstrual and having horrible case of prednisone rage/hunger I’m hoping it’s not a huge one….. but we shall see.

Tomorrow isn’t the end of anything, it’s just the continuation. And as many times as I’ve said I wanted to quit I am super grateful to Weight Watchers, I have meet so many people who have let me in and shared their lives with me, I’ve met friends, I got to that meeting every week and know it’s a safe place where I can say things to people who understand and not judge me, I can tell them how I woke up from a dead sleep at 2am had a bowl of ice cream and went to bed, and not feel like I’m being judged and have someone understand or have a similar story. It makes me not feel alone. Losing weight is hard, we all know that, that’s why so many people quit, It’s better when you have someone in the journey with you.

I thank you all for your patience with my while I took an extended hiatus from blogging, Thank you to those who came to my blog even when I wasn’t posting…. that’s amazing! Thank you to those who reached out to me while I was gone asking me where I was, and thank those any new readers I may have you all are apart of this journey and I sincerely appreciate you. I hope that you have a wonderful new year. And may it bring you good luck and good health.

This past week I have really been in reflection about my weight loss. I had to come to some hard conclusion about my current situation and my weight loss goals, my plan was to talk to my WW Leader about going into a sort of  faux maintenance until I was weened off Prednisone, for the first time I had to say out loud that at this moment in my life weight loss in NOT my main priority.

I went on to the monthly 5K that my local Weight Watchers sponsors (if anyone is interested the next one is Oct 10th @10:30 at the Hyde Park location… all are welcome, you don’t have to be a member to participate) and one of the other leaders who’ve I formed a relationship with asked me about my journey, so I told her what I was going through and she suggested that I after I finish seeing my dietitian have my doctor simply right that due to medical reason I have reached my goal. Then I can go into maintenance and head into Lifetime Membership. I’m frustrated because this is not how I wanted to do this, but as we all know things rarely go as we plan.

Last week I weighed in and I showed a 0.4 gain. I was happy with that despite all the activity I was putting in. I was premenstrual and figured that was it….this week was more of the same as far as activity was concerned and considering the fact that it feels like my face has grown twice it’s size (thanks prednisone moon face) I was expecting a gain but I was not expecting a 3.2 pound gain. I normally would be angry, but I’m doing everything that I’m supposed to be doing, and as much as I hate to say it …. this is simply out of my hand…. as it stands now my total  weight loss on Weight Watchers is  0.8 pounds…. like I said, nothing has gone as I planned.

For those of you interested Last Women Stepping ( 10,000 Steps every single day)….are gearing up for there October Challenge and all are welcome to join. This week I didn’t do to bad if I say so myself. This actually doesn’t reflect my pre-Weight Watchers walk (nearly 4 miles) it was good to get out and I was able to walk on the Lake Front and see the runner who were participating in the Chicago Half Marathon.

Also today I officially completed my 30/30 Challenge with Girl Trek and my golden shoe laces are on the way!!!

Honestly I think this is a good, this will be a true testament to my weight loss, if I can conquer the dreaded Prednisone….. that everything else should be a breeze.

See Ya Next Week,