It was a really bad week, late on Saturday I seriously thought about not going to the meeting this week, I woke up today and thought, “I should just skip it” but I went anyway. I figure on the days that I don’t WANT to go are the days when I NEED to go. I’m not sure what’s going on; it could be that I’m still having my lady business or Ii t could simply be a side effect of the budesonide; but I’ve eaten anything and everything this week.  If my mouth can open and it was edible I’m pretty sure that I ate it (although I didn’t enjoy it and got no satisfaction from the food that I was eating). I normally don’t delve into my weekly 49, but this week I ate all but 11 of them.

Despite eating anything and everything in my way I’ve been trying to walk at least 10,000 steps a day,

and honestly it was not as difficult as I thought it would be, I tend to be very sedentary so getting up and making sure I get though steps in is sometimes a challenge, I’ve been doing a lot of walking around the house, walking in place…. anything to get those steps in, I may look like an idiot, but get a every excited when my Fitbit shakes and tell me that I reached my goal.

This week the topic was portion/serving sizes. And for the most part I think I’m doing pretty good at, but there was a demonstration and I realized that I don’t weigh my potatoes… I just guess at how much they weigh and attach points to them. So let’s say that for two meals I miss calculate and “don’t track 5 points …. that’s 35 extra points for the week that I’ve eating and haven’t tracked… which may very well show on the scale… I think I’ve been doing that. So this week I’m goanna be super vigilant with weighing and measuring everything.

Speaking of scale… I gained, I’m not surprised, but I’m sick of the lose, gain… gain cycle I seem to be going in… I feel like I’m not making any headway towards my goals. As I continue to go through the first week of 2015 I was feeling a little bit uncertain…. then I realized something… 78 pounds… I have lost 78 pounds. That is amazing… I’m 2/3 through my journey. 45 more pounds… I didn’t lose those 78 pounds in one year, and I might not lose those 45 pounds this year… but I have to remind myself, I’m doing it the right way and gaining is part (even thought it’s seriously frustrating) part of the process. 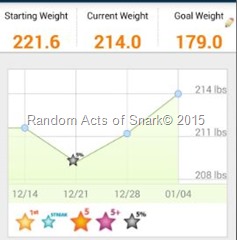 I’ve come to the conclusion that I’m bored with the food I’m eating, and part of the problem with me eating everything in sight is that I’ve been eating snacks instead of eating meals and I’m getting hungry faster because they aren’t satisfying me. So this week I’ve committed to finding and making two new recipes. There was a lasagna recipe that I saw in the latest Weight Watchers magazine and I think I want to make something in the crockpot…

This week was a mixed bag, not the best and honestly it could have been worst… I’m just gonna stick with the plan and see what happens next week. 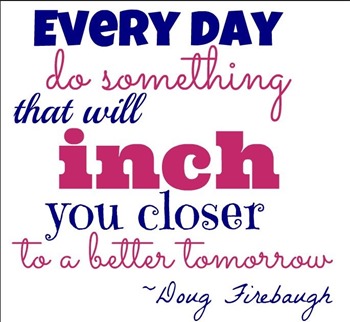